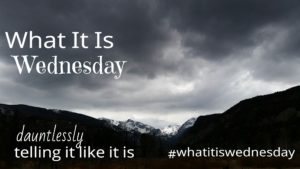 I have seen a lot of this recently in response to recent tragedies. There is a common reaction when a societal injustice or tragedy is spotlighted and the person seeing that issue discussed openly and passionately feels uncomfortable for any of the following reasons: recognition that there is injustice, resistance to facing one’s own role in the silence around an injustice, fear of alienating others by adding one’s voice to the dissent around an issue, avoidance of one’s own biases or inherent privilege being exposed, unwillingness to explore change around an issue (such as changing one’s mind or admitting to possibly having been wrong about the issue for any reason), or uncertainty and fear around any aspect of an issue. There are many, many reasons we don’t raise our voices.

The outward reaction, if one is even given, is often some variation of, “Well, duh. That sucks, and it’s not like we don’t all know that it sucks, but what do you want ME to do about it?” There are other reactions but this one is one that I want to address this Wednesday.

Here is what you can do about an injustice or tragedy caused by some terrible fracture in our culture that leads to someone else’s marginalization, physical harm, victimization, bullying, or death:

SAY IT OUT LOUD.

Your voice is powerful, solely yours, and completely free. State out loud how you feel about the terrible things that hurting and angry people do to other people in today’s culture. Say it. Say it over and over. Express your dismay and your grief and proclaim it again and again to yourself, to your friends, to your family, to your local and federal government officials, to the WORLD.

It is not enough to refuse to support injustice if you want to facilitate change. Be part of the conversation to the extent that you are able (and qualified / educated enough) to be. Be present so that you might hear new information and learn about some way in which you are able to tangibly help that you would not have known of if you hadn’t added your voice to the dialogue about what’s gone wrong.

The thing about saying it out loud is that it isn’t just something to do when faced with visible and obvious injustice. It isn’t just about doing what’s right for your community, or facilitating change for others.

Using your voice can heal YOU.

Giving our feelings and our experiences a voice is one of the ways that we honor where we are at so that we can move forward into who we will be next, and silence is an active barrier to that growth, both in our community and in ourselves. Our voices (and then our ears) are tools for healing, for self empowerment, for societal dialogue, and for change.

Your voice doesn’t always have to span the globe or reach Congress. It doesn’t always have to immediately further societal improvement. Sometimes your voice can be an admission to a close friend or family member that you are not okay, prompting support and love from those who want you to be okay and are willing to bear witness to your journey.  It can also be an admission that you’re not okay with something that has happened in the world, prompting someone close to you to possibly think differently.

Your feelings and beliefs deserve a witness. Unstated, they sit silently and unmoving, sometimes festering, seldomly transmuting, often unable to grow toward resolution. Stated in an appropriate way, they are powerful catalysts to be honored, discussed, and then released to make room for change, growth, and evolution, both of ourselves and our community.

What are you carrying with you that could be spoken aloud today, either for yourself or for your community? What’s stopping you from allowing those words their journey?

This post is my contribution to this week’s edition of a blog hop started by Kelley Harrell of Soul Intent Arts called “What It Is Wednesday,“ which gives bloggers a chance to dauntlessly tell it like it is. Check out the inaugural post to learn more about joining in or just to read other blogs in the hop.

This site uses Akismet to reduce spam. Learn how your comment data is processed.